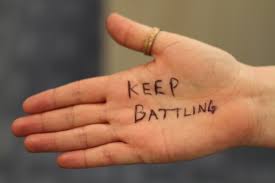 I thought I had it. What I wanted professionally. The pay was good. The position appeared to provide a modicum of stability in the form of a multiyear contract.

I could finally exhale. Relax a bit, kick back, and do my job without fear of how I'd be earning a living in six months--much less afterwards.

It didn't happen. I didn't get what I wanted. The uncertainties remained.

I pouted. I sulked. I withdrew. I summoned various vendors from my past and threw myself a good, old fashioned pity parade.

Woe is me, I thought. I'll never get what I wanted.

Today I'm saying enough. Enough with the wallowing in what I don't have. Enough of basking in my self-proclaimed underdog status.

I've had enough. It's time to return to battle. To keep pushing ahead for what I want.

I need to keep learning that no one is going to give me exactly what I say I want. Nor will it otherwise magically appear in my life.

I need to work for every bit of it. Just as I have done throughout my life.

This week someone described me as resilient and courageous. I asked him to explain as I have never considered myself as such.

He pointed to my dogged persistence to pursue a career as a late career academic. He highlighted my ongoing willingness to do whatever it takes to achieve that end.

Which led me to think of the little things I do daily that add up to results. No one has to tell me to do them. I just do them. And they produce the things I say I want in my life.

In other words, I must continue to battle. To work hard. To be proactive in asking for what I want. As I have done during the best parts of my life. And as I must do today, tomorrow, and every day thereafter.