Persistence, Chance, and Luck Can Make a Career in Public Relations 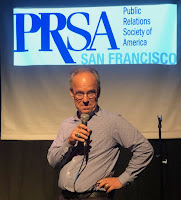 “You shouldn’t have started your consulting practice so early in your career,” said one public relations professional while interviewing me for a job.

“We couldn’t figure out your professional narrative,” proclaimed another practitioner, who was chair of a committee considering my application for membership in a public relations honorary organization.

These comments stung. Yet once I put aside my bruised feelings, I could discern the underlying issue: my career had evolved in a non-traditional fashion that to some defied logic if not common sense.

I never intended to work in public relations. Even after I landed my first job at a public relations agency, my path was anything but straight and narrow. I ended up where I am today through persistence, chance, and luck, not as the result of a detailed plan executed over time.

I originally intended to become a history professor. After earning my BA, I moved to Northern California to attend Stanford University’s PhD program in Modern European History.

I left school after earning a master’s degree, realizing that I was ill-suited for work as a professional historian. I turned my energies towards finding a full-time job.

A non-profit organization hired me as a Fundraising Assistant. I never raised funds, although I assumed other responsibilities.

My roommate at the time talked about Toastmasters, a nonprofit organization that teaches public speaking and leadership.  It sounded like something I would enjoy. I checked out a local club. I liked it. I joined. Little did I realize that I had stumbled onto something that would transform my career.

I threw myself into Toastmasters. It turned out to be a place where I could channel energies that I had not yet had the opportunity to apply in my job. I prepared and delivered a lot of speeches. I assumed volunteer leadership positions throughout the organization.

I began to promote the benefits of Toastmasters. I devoured its materials on publicity and applied what I learned; still, I felt more could be done. I turned to local community newspapers (the Internet wasn’t available yet). I started to learn as much as I could about them. I noted types of news they covered, and how I should submit information.  I had no one to teach me. I learned by doing.

My efforts yielded many stories about Toastmasters clubs in local media. My fellow members were impressed.

Meanwhile, I had concluded that I needed to leave my non-profit job. I hoped to apply my new media relations skills in a new job. A member of my Toastmasters club, who worked at a public relations agency, knew about my interests.  He invited me to come in for an informational interview. I did. Two months later, the agency offered me a job. I soon discovered I was the only person at the agency who didn’t have an undergraduate degree in either public relations or journalism.

I started as a junior account executive, and in that role I pitched countless stories to reporters.  I did reasonably well in this work. What I understood less well was writing. I had no clue how to write using an inverted pyramid structure. I learned quickly, by writing countless drafts of press releases, pitch letters, and other documents.

I look back fondly on this agency experience as I forged many relationships I’ve maintained over the years. Yet that agency’s harried pace and relentless pressure to perform wore me down. I looked for a public relations position inside an organization, and soon found one.

After a year and a half in that position, I thought: “I can do this on my own. I don’t need anyone to direct me. I can be my own boss.” Voila, Mitchell Friedman Communications was born. It was 1992, when few public relations professionals were independent consultants.

I didn’t have a business plan. I simply reached out to former agency colleagues. Several hired me to help with their media relations efforts.

Soon, my Toastmasters experience beckoned me to expand my services. I realized I wanted to speak, train, and teach. I reached out to my former agency colleagues, who hired me to lead training programs. They also referred me to others.

I craved opportunities to build longer-term relationships with individuals who sought professional development, above and beyond short-term training programs. Teaching seemed to hold some promise. Again, chance provided an opportunity. As a board member of a local public relations group, I got to know the academic coordinator at a school that offered master’s degrees in public relations. During one conversation she commented that “we’re always looking for people to teach.” I responded immediately: “I’ve always wanted to teach.” Five months later, in January 1998, I was teaching a new course about public relations on the Internet.

That teaching opportunity led to others at universities located throughout the U.S. and included the public relations campaigns course I continue to teach today. Still, as a part-time instructor, there didn’t appear to be a long-term career path for me at any university.

I decided to return to school to earn a doctorate to increase my chances of landing a full-time teaching position. I studied organizational behavior and leadership, which I felt nicely complimented my public relations experience. After graduating in 2011, I worked in administrative roles at local universities while continuing to teach courses on public relations campaigns, crisis management, leadership, and other topics.

As I teach, consult, and coach clients today, I can share the details of my path with a confidence I had long felt was beyond my grasp. Indeed, there is no one, right career trajectory in the public relations field. I’m living proof of that.