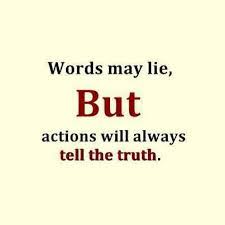 Things occasionally went awry in my house when I was growing up. Sometimes I was responsible; at other times, my sister was. In those situations she would automatically reply, “well, I didn’t do it on purpose.” The comment became a source of minor amusement. It appeared my sister wanted to be judged on her intentions, not her actions.

I could no more read my sister’s mind then than I could anyone else I have known over the course of my life. Conversely, I long deluded myself. I thought others would discern my noble or grand intentions. That’s despite seemingly contradictory actions.

A mountain of good intentions don’t mean much. People evaluate me based on what I say or do. So that's what I need to focus on, not what I had hoped or wished for in any encounter.